Getting Unique Intersections of Multiple Polygons Efficiently in Python

Based on the top answer to this question, I have this code:

I'm thinking there should be a way to use either/both of the above to do what I want, or perhaps a different way to get what I want in that loop, but I can't figure it out ... help?

Full ideal solution: I would have a list of polygon intersections that best represent the overlaps of the original polygons, such that in the triple Venn diagram case, 4 overlaps with that center being separate because it's 3 overlaps instead of 2.

Maybe good enough solution: Unique overlaps that just don't overlap with each other. So in the triple Venn diagram case, it could be good enough to just return 3 overlaps, where the center is included in ONE of the pair-wise overlaps. I think that could avoid a cominatorial situation.

Look at the How to find the intersection areas of overlapping buffer zones in single shapefile? and the solution is to
1) use the properties of unary_union with the LinearRings/LineString of the polygons (it cuts the lines at each intersection,Planar graph)

The result is 3 overlapping polygons 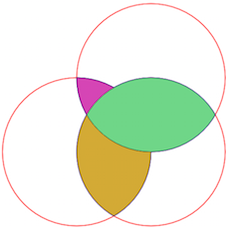 Now use the unary_union predicate

2) then use the polygonize function

The result is 4 polygons that do not overlap 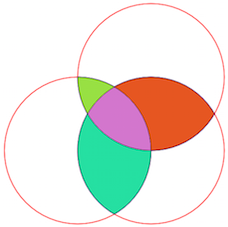 Not the answer you're looking for? Browse other questions tagged python intersection shapely or ask your own question.

12
Getting intersection of multiple polygons efficiently in Python
3
How to find the intersection areas of overlapping buffer zones in single shapefile?