I'm following an OpenLayers tutorial and already there is something wrong after trying to represent a simple map.

I will show you the code I copied from the tutorial and when opening my HTML file with Firefox, it should show me a OSM map. However it doesn't do anything. I have tried to write "Test" into my html, and that worked, thus I guess the problem lies somewhere else.

I guess, there is a typo somewhere but I just can't see it.

Another possible problem is that I'm using Ubuntu. Perhaps it has something to do with that?

Here is also a screenshot from the project folder: 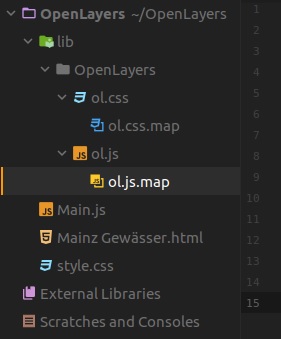 In OpenLayers 6 the map div must have a size, such as

in the quick start example https://openlayers.org/en/latest/doc/quickstart.html