I'm trying to join touching lines within a linestring dataset, so that I end up with a single feature for each set of touching features (eg the set outlined in green below). I've tried pretty much every algorithm I can find, including dissolve, merge, union (in QGIS, including the GDAL and SAGA options), ST_LineMerge in PostGIS, but the lines refuse to join, even though the end nodes of the segments are coincident. Can anyone suggest a process which would do this? I'm running this as part of a processing model in QGIS which has several hundred thousand records, so it needs to be a process I can include in this.

The next part of the process uses 'split with lines' to split the feature into components at line joins, so in the example below I need to end up with three features. 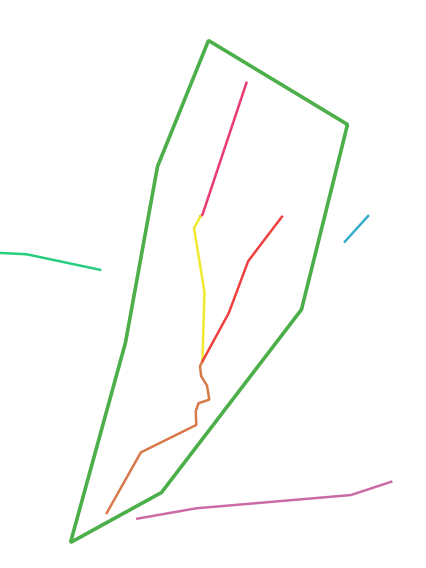 I can manually merge the features into one using the 'merge selected features' tool, but I can't see how to run this as a process, and even so, running 'split with lines' on the result splits the lines as they were initially, resulting in four features not three.

My guess is that there is something about the data which is causing this, but I can't see a way of fixing it, or running the merge.

There could be a gap between the data that you don't see. You should try to use ST_SnapToGrip before trying to merge to be sure.

Also check your geom with ST_AsText to be sure that the end of your geom is the start of the other. If not, that means you may have to detect which way your line is (maybe by testing the ST_Distance between ST_StartPoint and ST_EndPoint) and reverse it (with ST_Reverse) before ST_LineMerge.

2
Cannot st_linemerge a multilinestring because its not properly ordered
12
Splitting lines into non-overlapping subsets based on points using PostGIS
10
Joining segments of a line in QGIS?
10
Is there a “Merge Parts” tool in QGIS?
3
PostGIS snap line segment endpoint to closest other line segment
3
Get location of PostGIS / GEOS topology exception
1
QGIS - Joining intersecting polylines