QGIS: Map theme with layer visibility AND style, does it exist?

I'm now working with QGIS as I'm working with more data, and I haven't find a good workflow to quickly change styles on multiples layers. I'm talking about unique style per layer saved as a "combination", so I can quickly switch between different visualisation.

Map theme is almost that, but it only switch layer visibility. I know I can save layer style independently and apply theme, but when you want to switch multiple layers, the workflow becomes really cumbersome.

What is the closest thing to that in QGIS 3.1x ?

You can do this using named styles and themes.

A theme (see the Manage map themes icon in the Layer panel) is a combination of layers to be shown and the named style to be used for each. If you're not using named styles, it will be the default style for each, but if at the time you save the theme, you have a different style active for a specific layer, that's what will be saved as part of the theme.

I use this extensively. I have a Map theme, which uses the default style for each constituent layer suitable for a (topo) map. I have an Aerial theme, which uses aerial photo imagery rather than contours, etc., as the basemap, and also switches trails and placemarks to different styles, named Aerial, that contrast better with it. See example below, with a clip of the right-click style menu overlaid.

What's great is I can tweak e.g. a layer's Aerial style while in the Aerial theme, then switch to the Map theme (and map style) with a click, and still preserve my Aerial tweaks for the next time I choose that theme, since I am now using default style for each visible layer (all changes saved when I save the project.) 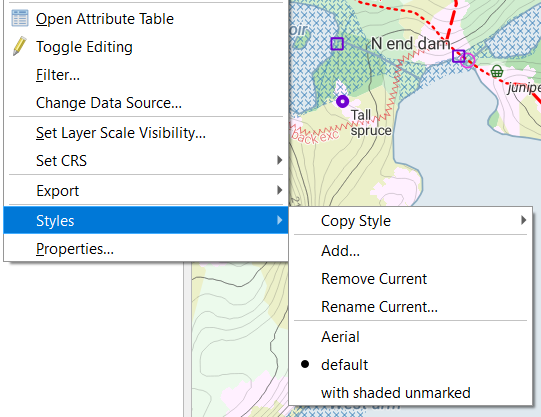 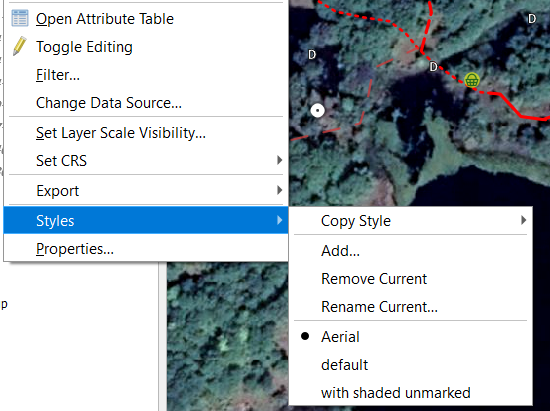 Not the answer you're looking for? Browse other questions tagged qgis style workflow theme or ask your own question.

5
Which WMS is easiest to work with when using QGIS?
2
How to use SLD to filter a WMS layer but without setting any styles?
0
organize the map theme and style configuration file
5
Finding overlapping areas in same polygon layer using QGIS?
3
How can one solve the "Handle Unavailable Layers" error on a csv file in QGIS?
1
How to link a theme to a map layout in QGIS?
1
Store QGIS map themes (to XML)
3
Labeling only subset of points inside polygons in QGIS