I have for now just used the standard Get Feature Template in the documentation. The first example should make all the returned data format into bullets instead of little tables. For some reason my middle returned feature still shows as a table. And it appears Geoserver is not using the template for this layer, visible from the 333 I typed at the end of the feature.type. Any suggestions to why GeoServer is not formatting the middle table? It must be a setting I am guessing.

All the info returned is coming from PostGIS views, the GeoServer has the same access rights to each view.

Update I had a play, and if I remove the content file from geoserver_data/templates and place it in geoserver_data/workspaces/<workpacename>/<store>/<layer> the template loads again for the first layer. However if I do the same for map_abundace_overview again the template is not applied. I did a search for tfl files and found the one i created and a couple under medford, which i renamed. Any suggestions? 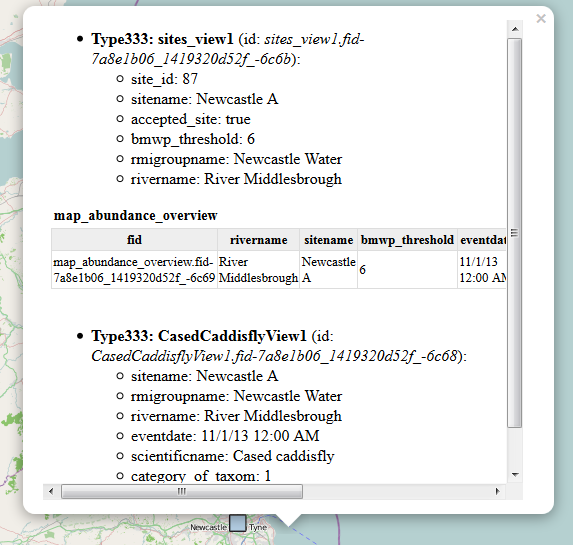 Ok, after playing around lots. It is was the styling, my layer had 32 styles associated with it pending an attributes value between 0-32. Changing the layer style back to point allows the GetFeatureInfo template to be applied. I now have to figure out the layer styling again.

Not the answer you're looking for? Browse other questions tagged geoserver getfeatureinfo or ask your own question.