I am using NHD High Resolution data (need to use this dataset as some other calculations are dependent on it so I don't want to go the direction of deriving my own streams from DEM data) and have just shy of 500 "pour points" that are snapped to the NHD High Resolution data. I fully understand the intent and concepts but am struggling with how to compose the methods to automate this for all the sites within the confines of ArcGIS (version 9.3.1). I do have 10m DEM data for the whole study area for getting the elevations.

I've been working some long hours so my brain is probably making this harder than it is...

and I have come across these two other posts on GIS StackExchange but have been struggling with how to adapt them to my needs:

It seems like all the pieces are there ("m-aware vector streams"), etc. but I'm starting to wonder if that's not the case without, again, a common identifier to identify which upstream segments should be considered part of the downstream "main channel". 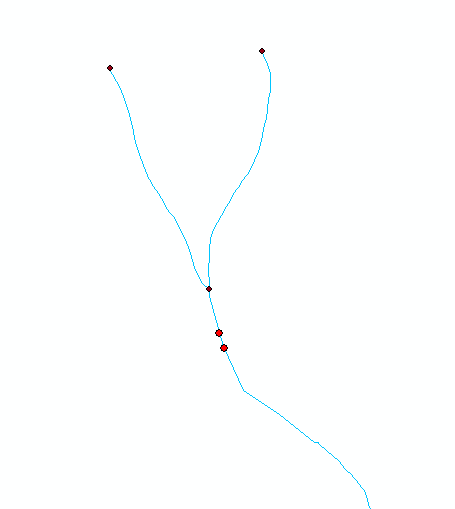 With the shown example, the darker red dots are the nodes, and the bright red dots are the stream sampling points. To calculate a main channel slope, if I write an automation program I need some sort of attribute to cue off of to be able to identify which of the shown upstream segments are part of the "main channel". This case is an instance where the segment that has the sampling points (bright red) and the upstream segement that branches to the left have the same GNIS ID so I could use that. But the NHD data have many instances where smaller streams of this nature simply don't have GNIS ID's at all. And the from/to node info or even the NHD Flow table which I have simply tells you that both upstream segments flow into the sampling point segment. With this example as a demonstration of other instances that lack a GNIS ID, I need a way to automate the decision of WHICH upstream segment to use for calculating the main channel slope in a scripted program. What else could be used to do this?

Another example of where the GNIS ID could not be used as a way to hydrologically identify all of the segments that make up the main channel is where an upstream section has one GNIS ID and unique GNIS Name (e.g., "stream X", and then it takes on a different name (e.g., stream "y") from a confluence with another trib. A point on stream "y" hydrologically still receives main channel flow from stream x but the GNIS ID can't be used to connect the two.

The slope is obtained by extracting the elevations at the sample point and the point 100 meters upgradient along the main stream (and then dividing their difference by 100). Consider these criteria for finding the upstream point:

The latter identifies the main branch of the stream.

To implement these criteria, begin with a stream layer (1). Precompute a flow accumulation grid from a DEM. Given a sample point,

This workflow moves as quickly as possible to processing a small finite set of points, which consists of fast calculations. The key is the first step. It likely can be done with Network Analyst or by exploiting properties of measured polylines. It can even be done from scratch with little trouble because the topological information is already there. The algorithm requires just a few basic capabilities, in addition to basic list handling functions (add an element to a list and append one list to another):

Every arc a has a unique "from node" (upgradient endpoint), a.From. Every point p has an elevation, p.Elevation, computed if necessary from the DEM.

The input is the sample point p, the arc a on which it lies, and the desired upstream distance d (100 meters). It returns a set of points guaranteed to lie upstream of point p along a at distance d. (There may be no such points, in which case an empty set is returned.) Here is pseudocode (to which some key guard statements, "asserts," are added to establish correctness):

Not the answer you're looking for? Browse other questions tagged arcgis-desktop hydrography or ask your own question.