Using only part of inline variable substitution string in ModelBuilder?

Within my iterator, these feature class names represent my inline variable substitution string (called "count_field" in my model, see picture).

Next in my iteration, I alter a certain field name so that they can be differentiated within the table of the feature class. Currently I use this in-line variable subsitution to rename the field (e.g. "SJ_Count_%count_field%"). Also this process works fine. Here is a picture of the alter field window: 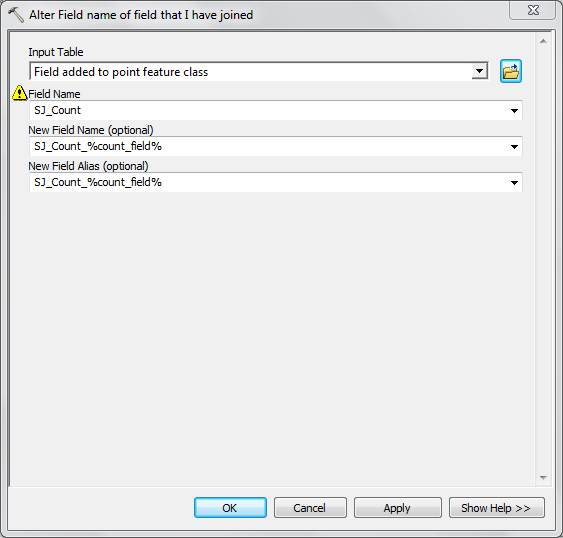 (Please ignore the explanation mark; this picture is pure for a demo)

The thing what I want to do, however,is that it only uses part of the inline variable to alter my field name. The last 4 letters of my inline variable (e.g. "_CBR") can be removed within my new field name. So a field name would be called, for example, "SJ_Count_SA_05_Bike"

I have tried in renaming my field name again but I haven't found a way to remove the last 4 characters through an iteration. Anyone any ideas how I could do this in an efficient way? Using python within the alter field tool does not seem to be an option (as seen from alter field tool window picture). Here is a picture of my model:

Use the Calculate Value tool in model builder to drop the last 4 four characters of your Count_Field variable. Set the tool to be a precondition to the alter field tool to ensure it executes first.

Set your expression as shown below

Not the answer you're looking for? Browse other questions tagged arcgis-desktop modelbuilder fields-attributes iterator or ask your own question.