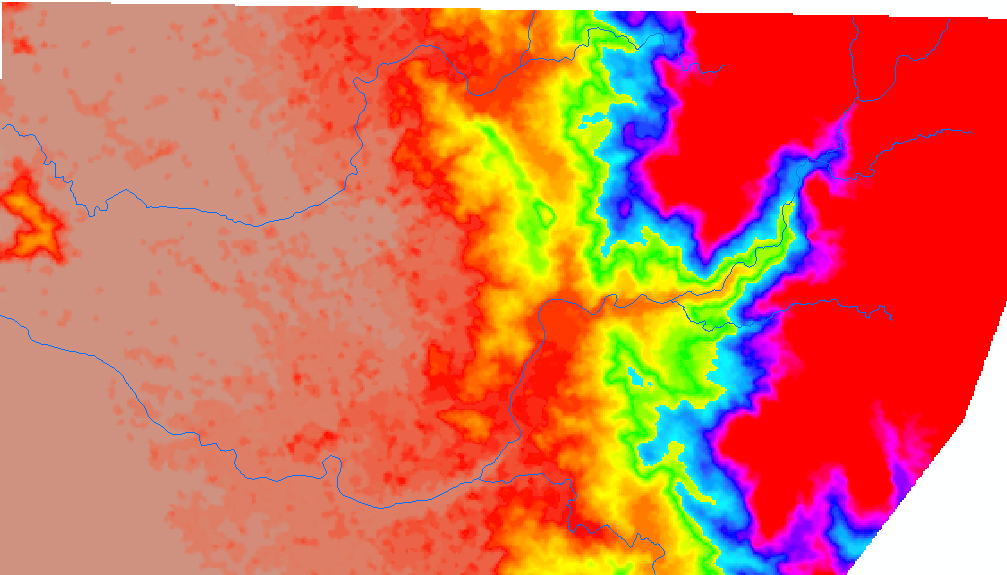 this is my DEM and the blue lines are my rivers. However, when I delineated flow accumulation from it, the following images resulted. 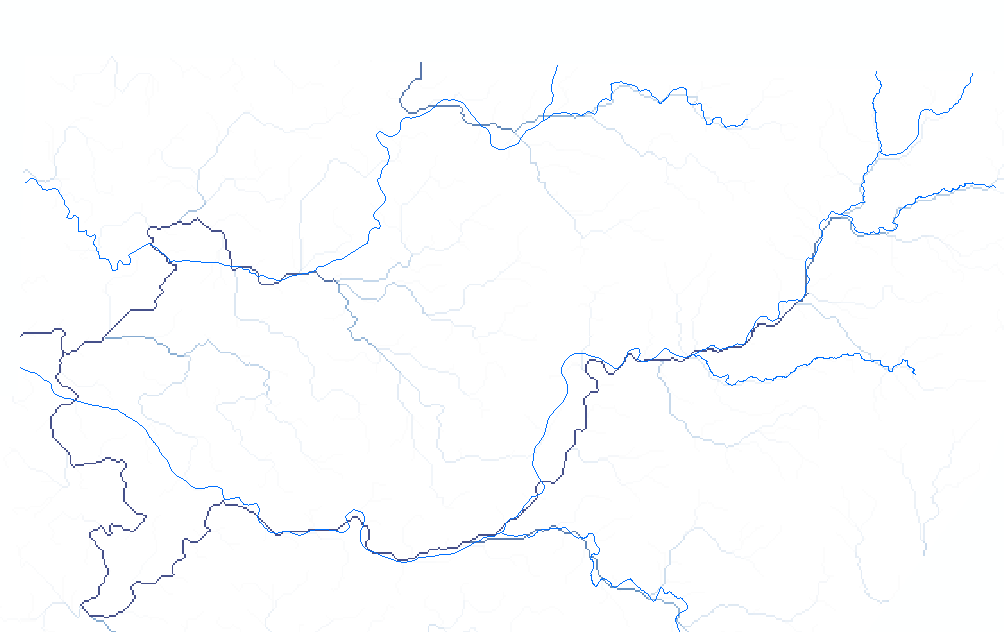 How would I resolve this? I tried DEM reconditioning in HEC-GeoHMS. I really believe it is stream burning, but, I don't think that it affects the DEM elevation since there has no effect on the high and low values in its layer. The high and the low values are still the same.

Okay, I've provided this answer to try and consolidate my comments above and to serve as a resource for others contending with the issue of stream burning. As I stated in my answer to this question Shapefile and DEM: check rivers behaviour, you would expect a mapped vector stream data set to deviate from a corresponding DEM-extracted stream network because you are comparing a model with a model, rather than a model with reality. This is particularly the case in the head waters of the channel network since that is where the mapped stream network is least accurate and the definition of what a stream is is somewhat ambiguous in these small first order streams. However, your stream networks differ just as much in the higher-order streams toward the basin outlets. This is a sign that your DEM is not of a sufficient quality to be able to accurately extract a stream network. Ultimately, to do what you want to do, you would need a more accurate and higher precision DEM. However, the main issue is this, with hydrological modelling the drainage patterns and basin delineation (represented by the flow accumulation raster derived from the DEM) is as important as the extracted stream network. Knowing whether a chicken-processing facility drains into a neighbouring field or directly into an adjacent stream makes all the difference and it's the DEM-derived flow network that tells you that. While you can burn your 'more accurate' mapped stream network into the DEM, doing so will not improve your flow accumulation (drainage pattern) map in the hillslope areas. It'll only improve the flow pattern along the mapped stream network and even then it'll likely result in parallel flow where a digital stream (in the DEM) and a mapped stream are not coincident.

Burning a stream network into a DEM is generally, in my opinion, a poor and much over-used practice. There are restricted cases where it makes sense. For example, it makes sense to burn streams through road embankments, effectively reinforcing flow along the buried culvert beneath the embankment. However people often have a false sense of high-accuracy when it comes to vector stream networks. The DEM-extracted stream networks derived from many modern DEM data sources, such as LiDAR, can often be more accurate than the blue-line network off of topographic maps, at least in lower-order basins. When the DEM is of low accuracy (as is the case with your DEM) a burnt stream network can give a false sense of accuracy when in reality it doesn't do anything to improve drainage patterns on hillslopes and can create strange artifacts along flood plains. These artifacts can sometimes be lessened when you apply an away-from-stream gradient as part of the stream burning, but most stream burning tools don't offer this option. A stream-burned DEM is unlikely to have more accurately defined basin divides than a non-stream burned DEM. Stream burning will also affect slopes measured from a DEM so it is strongly recommended that you use the original DEM for this purpose (although really that is the case for any hydrological pre-processing operation on DEMs). Often times, depression breaching algorithms can offer a better solution compared with stream burning, although depression filling, the more common DEM pre-processing method, will almost certainly offer a poorer solution.

In your case, your DEM has a very large flat area near the watershed bottom (lefthand side of the image). If that is the result of extensive DEM filling then my advice would be that if you are going to burn streams in a DEM be sure to fill depressions after the burn and not before. Of course, you'd likely be better off breaching those depressions anyhow. If the flat area is just the natural topography then I'd say that in such a low-relief area the whole basis of topographically driven flow path modelling breaks down and you really can't expect your drainage patterns to be anything near realistic in these areas. In such case, you'd need a much higher precision DEM than what you have. If you do need to burn streams, then you should use a decrement value that is sufficient to cut through artifact hills resulting from positive elevation errors. Therefore a decrement value of 3-10X the DEM error (RMSE) might be appropriate but this will depend on the data and topography. And remember, it would be a good idea to apply depression breaching or a hybrid breaching/filling algorithm afterwards.

Not the answer you're looking for? Browse other questions tagged arcgis-desktop arcgis-10.1 dem hec-geohms or ask your own question.

0
River channel is cut after rendering flow accumulation in hec-hms?
4
How is “Burn Stream Slope” in ArcHydro working?
2
Filling up river corridors in a DEM
2
DEM reconditioning?
5
QGIS: Edit elevation in DTM to get correct slope of a river
2
Stream Feature generated from DEM is missing data
0
Interpreting ArcGIS flow accumulation tool results in urban areas