I'm under an NDA so I cannot really get into specifics of what I am doing. But, suffice to say, I am taking a large amount of spatially-acquired data and drawing this data onto a Google Map surface using color to represent a range of values.

The main issue we are having is due to the vast amount of data collected, we cannot render this data on a map in a timely manner.

I have proposed that one way to improve performance is to aggregate the data in some fashion, thus reducing the number of data points on the map.

Spatially aggregating the map points are pretty easy, but the data is a whole other matter. We've tossed around simple statistics (min, max, median, mode) as well as some "made up" statistics (you don't want to know).

We were going to start with a simple average, but edge effects are causing some grief as the user zooms in/out of the map.

Generally, we need to maintain trends in a given area as one zooms out on the map. In other words, areas of the map with high correlation will look proportionally similar to other correlated areas at all zoom levels.

Imagine a rigid body with up to 64 spatially oriented points where each point has some numeric value. At some interval (typically 200ms), a snapshot of this rigid body takes place and we record each point and map it. This rigid body moves in a predictable manner with some variable speed. It is possible in a given square mile that we have tens of millions of points.

Spatially, correlation only applies if that point "belongs" to the same pass of data. So for instance, if this rigid body moves North for several meters, then makes a u-turn and moves South along side it's previous path, those points that belong to the North path are spatially "different" than those that belong to the South path even if a point on the North path are within inches of a point on the South path. That might be a long-winded explanation for saying we have spatial/temporal correlation.

I can't really describe in great detail what the purpose of the map is due to the NDA. Essentially, the user will look at this map and understand how good or bad things went. They can see this data on a Google map from zoom level 15 and up. Rendering tens of millions of points at zoom level 15 is painfully slow.

What I am looking for is a strategy to keep the same "message" at each zoom level while achieving a good performance.

How about dots ? Placed at the position of the aggregation, you can use the average (or one of the stats you described) as radius of the dot (you can even go one step further and make the color match the good/bad status and its saturation match the stength of the radius).

That way, users can see visually where things are right/wrong at a glance. 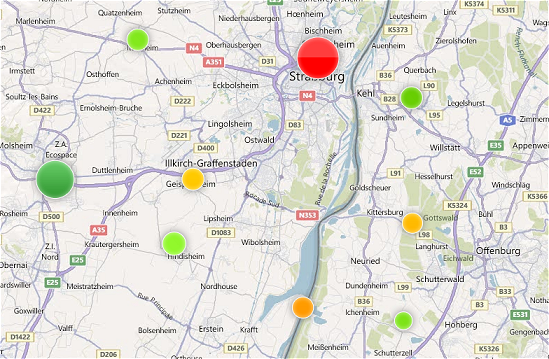 Personally I use a variant of this on a map with a few hundred thousands points and instead of a simple dot, it uses a composite of the icons of the main categories of points the cluster contains.

If you only need to visualize, heatmaps would be even better: it's very explicit for users to understand where the hotspots are, examples: 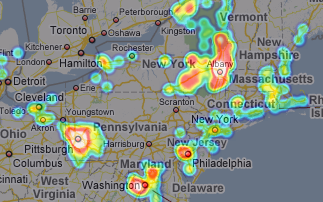 Here's a library for Google Maps.

Is this the sort of data you can encode into a video?

If so, then Esri's Silverlight SDK has the ability to put this on top of a map as a media element.

Here's an example of an earthquake simulation presented as a video. The number of elements in the earthquake model makes streaming the entire model to the client impractical, so in this situation video makes more sense.

Not the answer you're looking for? Browse other questions tagged google-maps spatial-statistics or ask your own question.