I have two binary rasters, raster1 and raster2, which represent the distribution of grassland habitats inside an area in two different moments in time (raster1 = older, raster2 = recent). In both rasters, grassland areas have the value 255, while everything else has the No data value of 0. The two rasters have the same extent and the cell centers line up.

I would like to do a simple change detection operation and create a new raster whose values are something like:

if raster1 and raster2 = 255 --> assign 255 to new raster (or any other value, i simply want it to represent "no change and remained grassland"

Anyone can suggest a way to do this in QGis? (that doesn't require much knowledge in writing codes, if possible)

Sure you can achieve this with raster calculator (In the main top menu as Raster / Raster Calculator...)

I simplified the names as raster1 - A, raster2 - B. The expression should look like this:

Update: For this operation the rasters in appropriate data type are expected, for example Int16. What you can do with your rasters is simply convert them into lower data type from Float64 using Raster / Conversion / Translate (Convert Format).... After you choose input and output file, you need to make expression in window editable and add -ot Int16 or some other data type to your liking as described here: http://www.gdal.org/gdal_translate.html 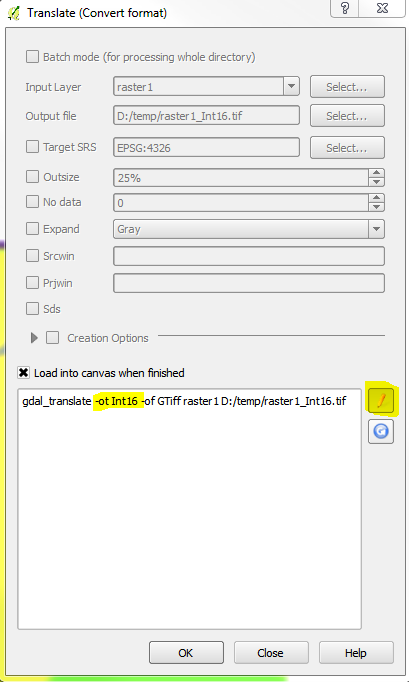 Or as suggested by wildintellect you can try use GRASS r.mapcalculator for it:

Processing / Toolbox should open toolbox docker, you might need to switch to Advanced interface at the bottom of the docker to see all advanced tools and then find Grass commands - Raster - r.mapcalculator which might work without need of translating the files.

Everything would be much easier with proper value assignment.

Reclassify your 1st raster to 0 and 1, second to 0 and 2. Calculate total.

It will have values in range (0,1,2,3) which are easily translated into your categories, e.g 3 corresponds to "no change and remained grassland"

Not the answer you're looking for? Browse other questions tagged qgis raster change-detection or ask your own question.

0
How to compare two rasters and reclass the greater value(python script)?
3
How do I replace cell values of a raster using values of another raster with differing extent?
0
Geospatially match cells of different rasters - possible?
1
Combining several mask rasters to obtain one single mask with binary values
1
assign raster values to another raster
2
PostGIS: Change raster values depending on values from other raster
1
Land cover change detection using raster calculator in QGIS