How to unproject a UTM ESRI Shapefile over WGS84 extent boundaries

I am working on a collaborative project in Python that uses GDAL/OGR to work with rasters and vectors. There is one function that attempts to project one ESRI Shapefile's coordinate system into another. This is done by creating a coordinate transformation from one spatial reference to another, then reading through the geometries and attempting a Transform, which is then written to an output vector of the desired projection. Read: reprojecting a shapefile.

I've ran across one application where it is desired to "unproject" from UTM Zone 3N (Alaskan Region) to WGS84 (lat/long). Doing this causes distortion and bad extents for the output, where the returned shapefile's polygon stretches from -180 to 180 degrees. I believe the issue is due to the projected shapefile crossing the extents of the -180 degree boundary. To confirm, I broke the projected shapefile into 3 parts, west of -180 degrees, middle at -180 degrees, and east of -180 degrees. When unprojecting west / east to WGS84, the returned shapefiles were as expected, however, the west portion lived at positive 180 and the east portion lived at -180 degrees. The middle portion was returned distorted. To visualize this better I provide 2 photos below, the first being the projected data as explained, and the second being the broken results as just mentioned: 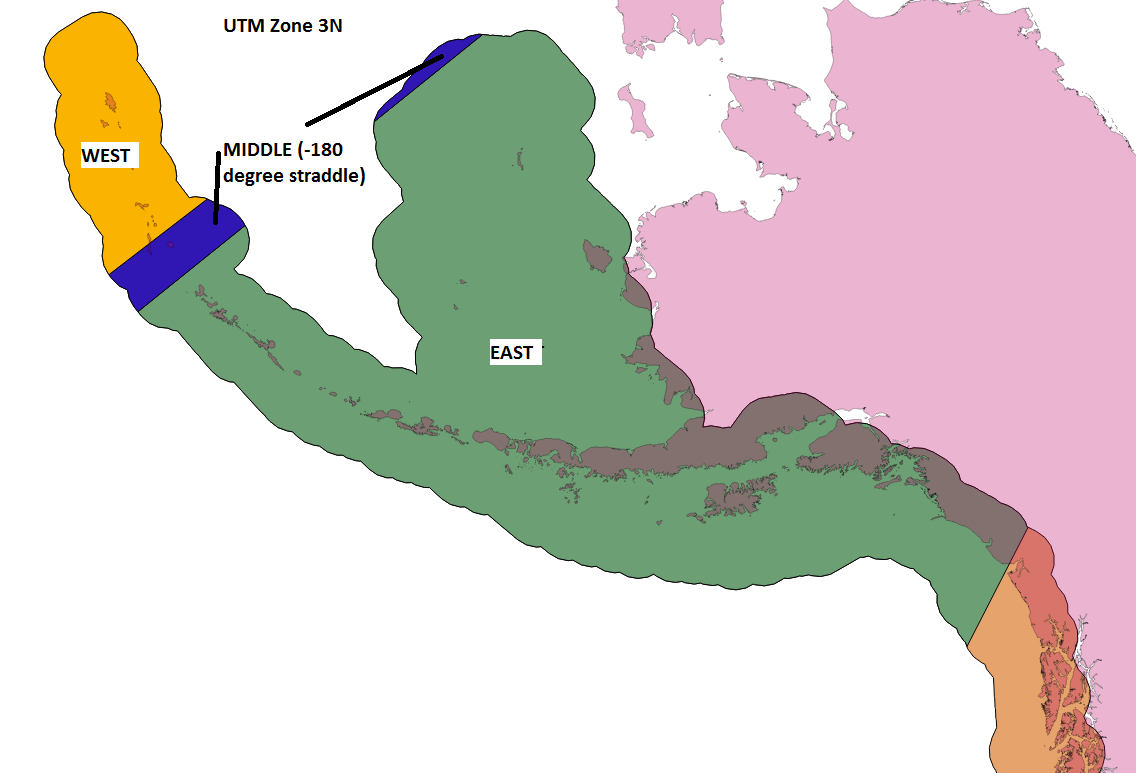 I would like to know the proper way of handling this unprojection in Python using GDAL/OGR. I'm a developer by trade and don't have a thorough understanding of GIS projections. May be similar in ideas to this post: How to stop gdalwarp creating world-spanning outputs near the dateline?

I can't see the images you provided atm but from your description I assume you're trying to use something similar to this: http://pcjericks.github.io/py-gdalogr-cookbook/projection.html#reproject-a-geometry

I haven't tried it but a quick search landed this, which uses an alternative method to reproject shapefiles using GDAL/OGR: http://geoinformaticstutorial.blogspot.com/2012/10/reprojecting-shapefile-with-gdalogr-and.html

Not the answer you're looking for? Browse other questions tagged python gdal coordinate-system ogr or ask your own question.

12
How to stop gdalwarp creating world-spanning outputs near the dateline?

0
How to unproject a shapefile in Python?
1
How to create polygon that goes over +/-180 (dateline) in ArcMap?
3
Gdalwarp with "out of globe" values in sinusoidal projection
3
Creating an Interrupted Map With OGR, Mapnik and PIL
2
Gdal how to properly describe geotransform in a netcdf file
1
Why is my CRS not projecting data points where they are meant to be using QGIS?
1
Projecting from Lambert azimuthal equal area (LAEA) projection to WGS84 without distortion using OGR