Why does FME reproject to wrong Coordinate system with TIFs?

I have a TIF Image in EPSG:31467 and need to reproject it to EPSG:25832 and convert to ECW format. I have to do this with FME2017 as ESRI does not write to ECW without the ECW licence. After transforming, I then load the image into ArcGIS 10.3.1 and see that the resulting image gets the coordinatensystem EPSG: 2632 (NUTM32) assigned to it. Where does this NUTM32 System come from? If I do the same with a SHP from 31467 to 25832 it works fine and shows the right coordinatsystem in ArcGIS.

Why does this work differently for images?

I don't see anything that suggests EPSG numbers are stored inside ECW datasets. Instead UTM projections are stored like NUTM32 (Northern hemisphere, UTM zone 32).

Similarly, the datum for that projection is usually EPSG:6258, but instead FME will write it as ETRS89, because that's what is expected in an ECW dataset.

I just tried creating an ECW file in EPSG:25832 and viewing it in ER Viewer and that is exactly what I see: 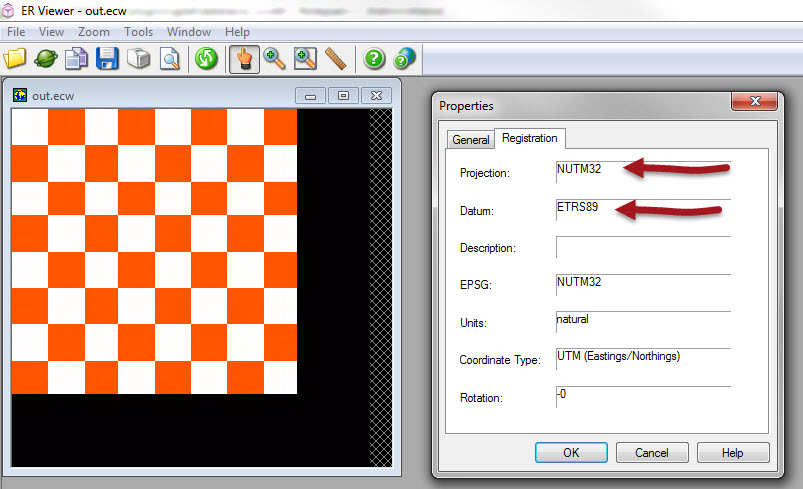 I do have some suggestions...

Imagery in ArcGIS uses a different pathway than vector data when handling the coordinate reference systems. Both data types use the projection engine, but imagery also uses an Esri-adapted version of GDAL, which uses PROJ4.

GeoTIFFs, in particular, have their own, quite old, standard which is based on the EPSG registry.

In the end, the raster/image side can get out-of-sync with the Esri projection engine and its current version of the EPSG registry.

Not the answer you're looking for? Browse other questions tagged arcgis-desktop coordinate-system fme or ask your own question.

0
CRS not defined for ECW created in FME