Pros and Cons of using Bilinear Interpolation and Cubic Convolution when dealing with DEMs? [duplicate]

I am currently processing a handful of DEMs (derived from LiDAR data). I have a conceptual question, when choosing a Resampling Technique what are the pros and cons of using Bilinear Interpolation and Cubic Convolution when dealing with DEMs specifically?

The DEM data will be used to calculate flooding in a watershed, so keeping data values as close to the original DEM as possible seems to take precedence.

I will be Mosaicing 6 DEM rasters together, then re-projecting (datum, NAD1983, will stay the same), and then clipping/masking the mosaic.

My main question is how does Bilinear Interpolation and Cubic Convolution affect DEM data specifically. In other words, what are the pros and cons of using these to methods on continuous data that needs to maintain numerical integrity.

Here are the specs for my data: 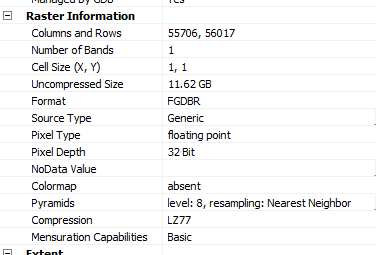 What you are dealing with is interpolation techniques. That is, you have two data points, and need to estimate the value of a point in-between. There are many such available, but the three main ones for the kind of raster processing you're looking for are:

Cubic interpolation is one form of polynomial, spline is another. The terms bilinear and bicubic simply mean as a linear or cubic interpolation for 2-dimensional data (such as a raster). This picture below illustrates well the three methods: 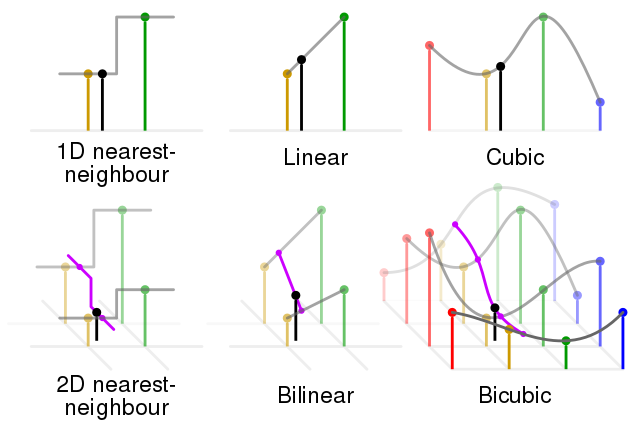 Now, to your question: what does this mean when dealing with a DEM? Or, better yet, how do each affect the processed image?

Conclusion: there isn't a rule set in stone as to which should be used, you really have to study your data and your goals beforehand. In general, I'd say that, if you have a more rugger terrain and wish to retain its overall form, or if you have the need to retain absolute values from the source data, you might want to use nearest neighbour. If having overall more correct height values, or looking nicer, is more important to you, then either linear or cubic. Splines should be used basically to make things looks nice, but are less statistically sound.

As a side note, for highly accurate work, it's common to use bilinear or bicubic while taking care of its downfalls. These are, specifically, the use of control points for retaining a few key absolute values, and breaklines for indicating where a terrain should have a steeper transaction. This is, however, usually done in photogrammetric software, not GIS (though ArcGIS does have limited breakline capabilities through its 3D Analyst extention).

EDIT: specifically for generating the least errors in values, I bring notice to this ISPRS article on accuracy comparison of interpolation techniques. I'll jump to the conclusion, but you might want to read it in full nonetheless: both bilinear and bicubic yield the best results, and are statistically indistinguishible, accuracy-wise. Also notice that the article too brings up the necessity of using breaklines for steep changes in height.

Not the answer you're looking for? Browse other questions tagged arcgis-desktop raster resampling or ask your own question.

22
Dealing with bridges and tunnels when modeling raster least cost paths?
26
What resampling technique should be used when projecting aerial photos?
6
Map Design: Pros and Cons of using ArcGIS Halos to improve readability of text in a map
7
What are pros and cons of forcing square pixels on reprojection?
0
Regridding a rasterbrick in R using bilinear interpolation