Imagine you're tracking, for example, vehicle or animal movement and receive regular GPS position updates. How would you visualize speed of movement on a static (= printable) map? I've been coloring the points in red-yellow-green where red would be "slow", but I think there has to be a better/more intuitive way to visualize speed measurements.

Another requirement would be that it should be possible to track multiple moving objects at once. Their paths can cross or run alongside each other (on the same roads).

Using Sporttracks and this plugin, gps tracks can be converted to KML and displayed in Google Earth. It supports some ideas mentioned here - track coloring based on color gradient, direction arrows and much more.

Some examples:
3D wall - combination of more things is used here. 1) Arrows showing direction, with actual speed as label. 2) Color of every point choosed from gradient depending on speed. 3) 3D wall - elevation of track "wall" above terrain based on speed. 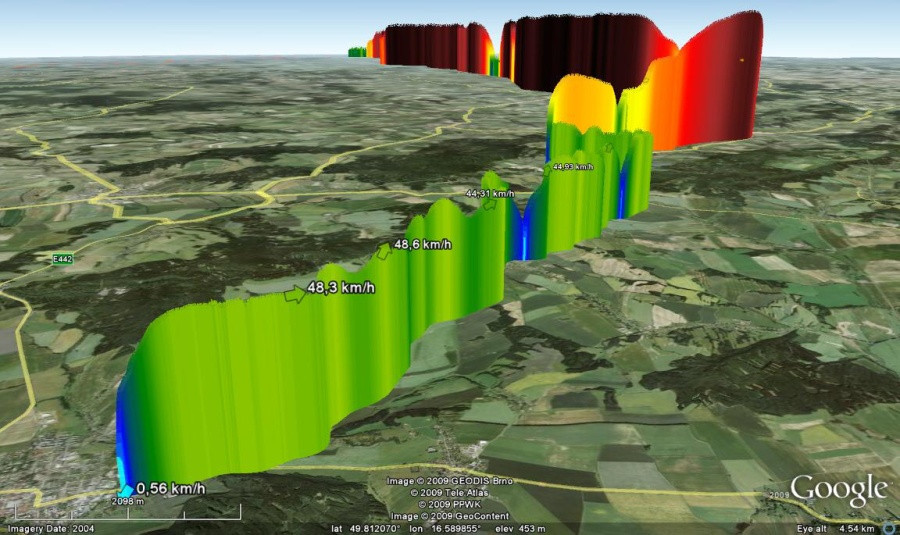 When using only one color for whole track, it's easier to compare speed between more tracks. 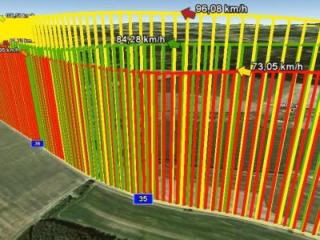 Shadow effect - number of tracks going same way is visualized here, but can be customized to visualize speed, etc. 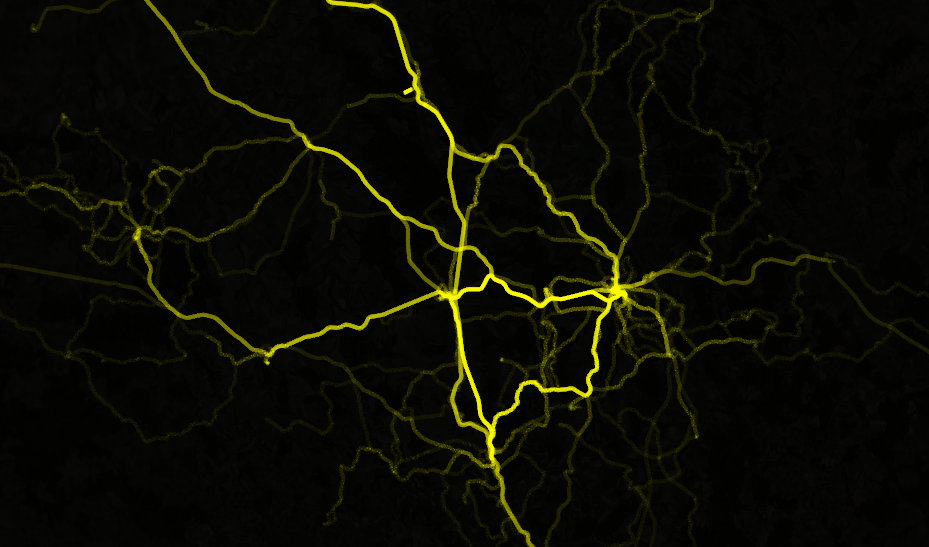 Arrow race - size and color of arrows are based on speed. 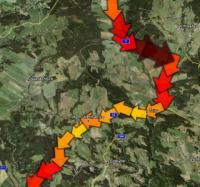 I've always done it as width. For example you create a buffer around each point that represents speed and then dissolve the buffers into one. Narrow areas indicate bottlenecks.

For an example see: http://www.fmepedia.com/index.php/Bufferer

Of course, you can even color code the buffers before merging them.

For an example see: http://www.fmepedia.com/index.php/Dissolver 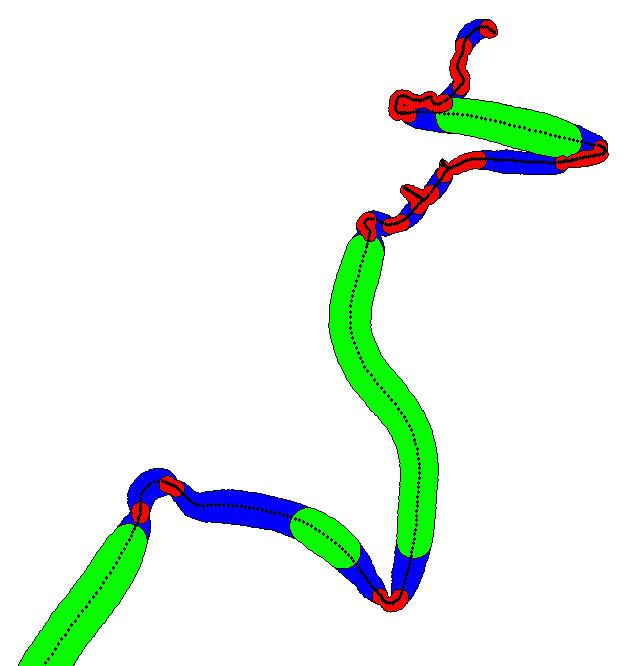 A simple and efficient way is to color the segments depending on their speed. For example, "fast" segments can be displayed in green and "slow" segments in red (other colors can be chosen of course).

Example on an orienteering-running GPS trace using the software Chmuk: 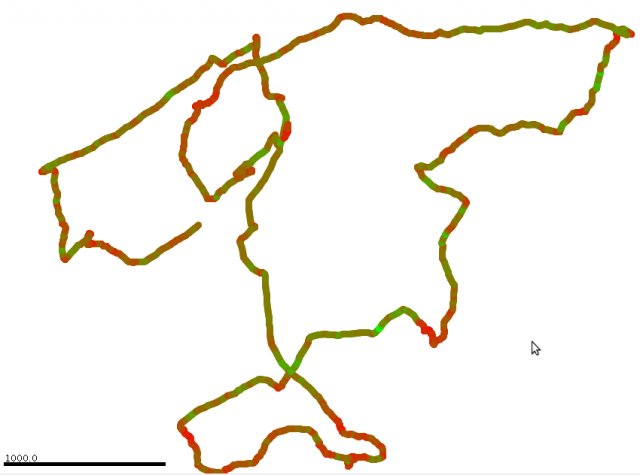 Another example with the software quickroute:

In this example, the color scale is continuous: red is for the minimum speed, and green for the maximum. A finite set of colors can also be used, with different methods to assign a color to each segment according to its speed (like the quantile method for example). Many guys doing orienteering use that to analyse their speed variations during orienteering competitions. It should work for animals and vehicles!

Of course, this method is very simple (maybe 'simplistic') but very easy to implement. The balance between complexity and quality is rather good compared to other tricky representations. Moreover, there is no need to be a specialist to read and understand such map!

I think you may be interested in work described as time geography, and you may want to use search terms such as space-time-path or space-time-cube. In the space-time-cube technique I would imagine you could still use color to represent velocity of the movements, although it is inherently represented in the space/time distance between nodes on your path.

Just doing a google scholar search for time geography visualization looks promising. And one of the first articles to pop up has some good color examples of what I am talking about.

The space-time cube revisited from a geovisualization perspective by: M. J. Kraak Proceedings of the 21st International Cartographic Conference, Vol. 1995 (1988)

Edit: In response that the OP wants to visualize multiple units in space and represent their velocity, space time cubes are probably impracticable. Even if you had some sort of limiting time span in the space time path it would be difficult to get an appropriate viewpoint of the 3d cube without distorting or hiding some of the paths.

I do think julien's suggestion is as good as mine, but it has a similar problem (minus the viewpoint, in the 2d case this will not be a problem). My only other suggestion off-hand would be that you do not have to limit the representation of velocity to dichotomous colors, and since velocity is a continuous distribution I think it makes more sense to use a gradient color scheme. You could also use proportionally sized symbols to represent velocity. Maybe using arrows as the point symbol, and use the direction of the arrow to represent directional components of the space time path would be insightful as well.

When you limit yourself to just a point in space it seems you lose some of the potential visualization of the interaction (paths crossing) between your points. But depending on the topic this may not be of any interest.

You can record the position of the vehicle with a regular time interval and gradually fade out old time points. Adding a line at each point whose length is representative of the speed can help too. Below is an example from Microsoft Research. It's quite easy to see the relative speed of different countries in this graph. 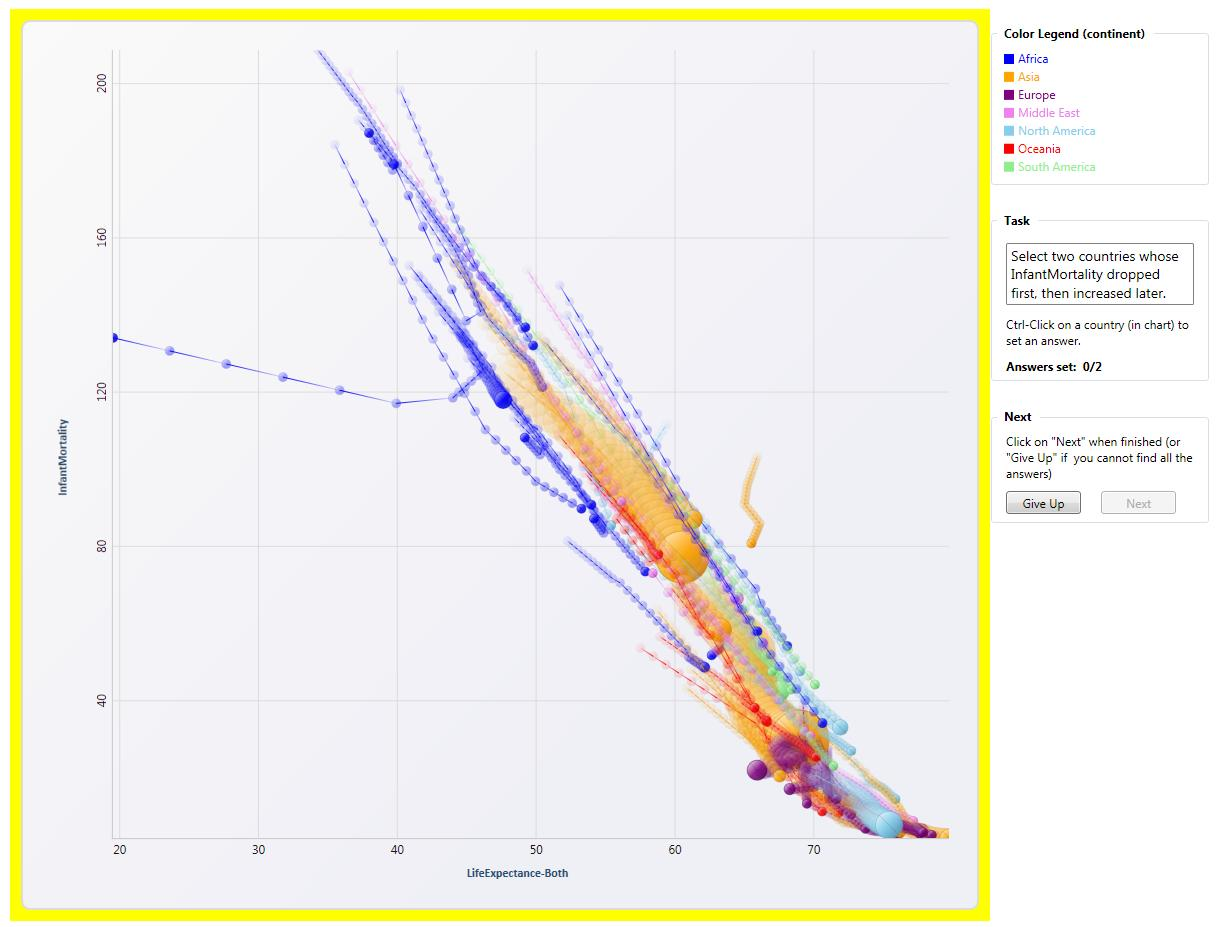 Since you have multiple objects being tracked I would go with using color to differentiate objects and instead of colour to show speed, I'd use thin lines perpendicular to the direction of movement illustrating 10 second intervals (say). Closer lines = slower. Not the best sketch below, but you get the idea: 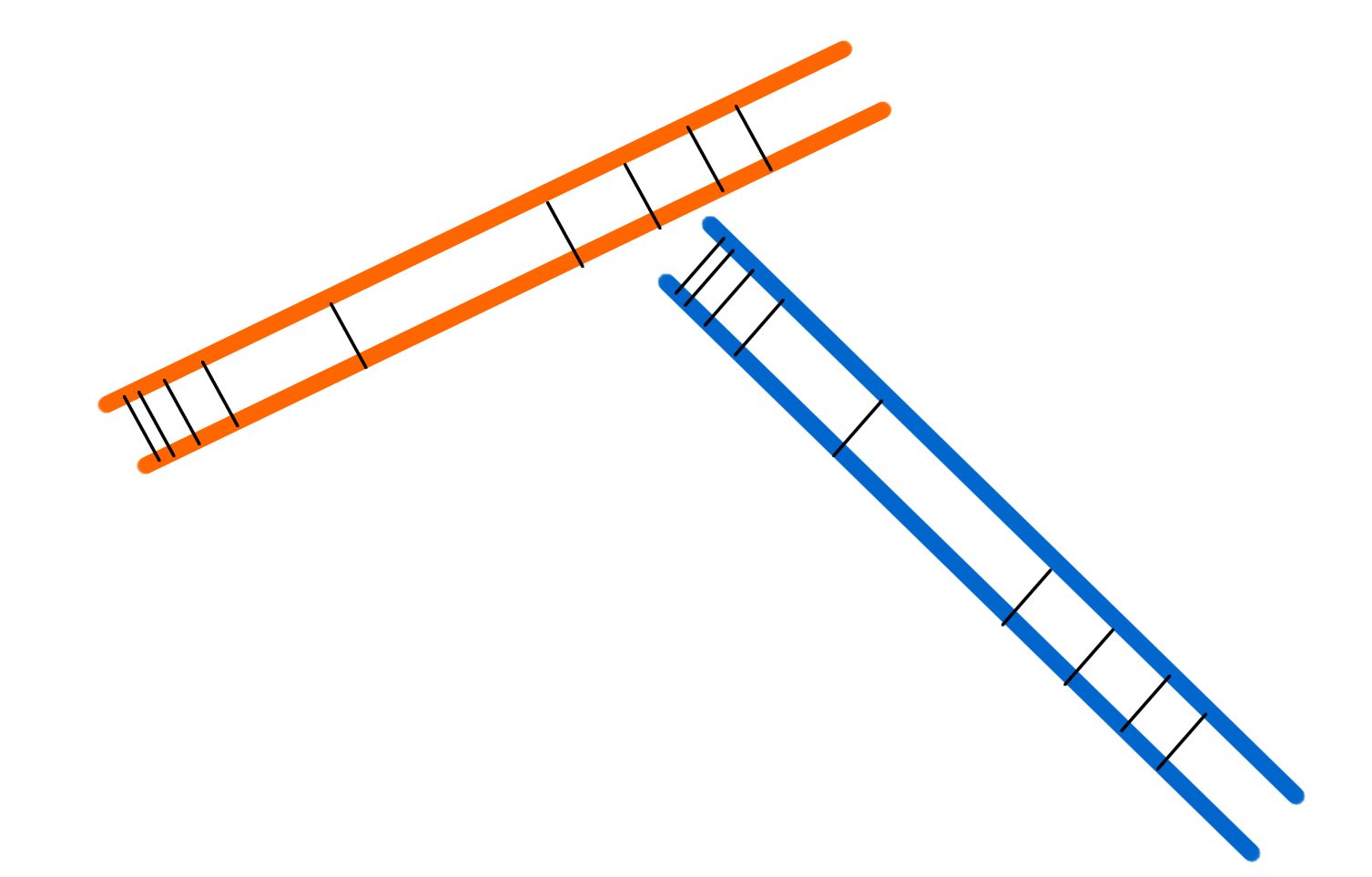 You might want to have a look at some of Gennady & Natalia Andrienko's papers. They have published extensively on the issue of geovisualization of movement data and some of their output might be helpful here. 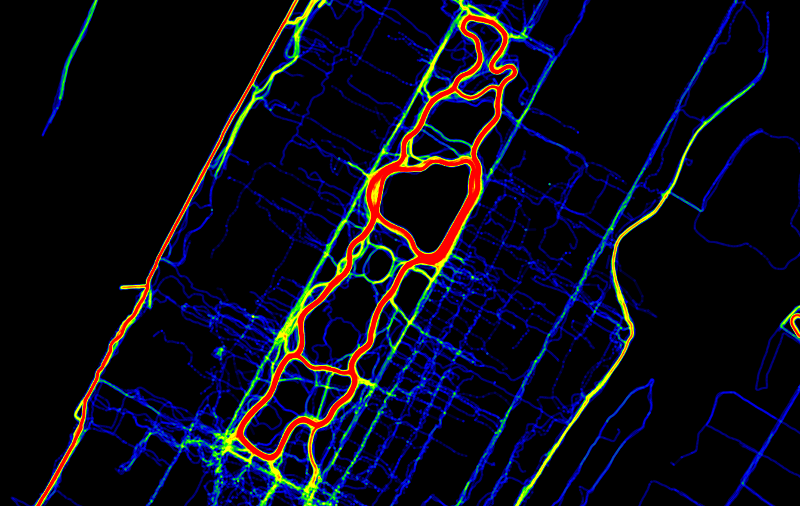 I think I would go for something in the direction of Trevesys suggestion but only with dots instead. Longer between the dots means faster and closer between them means slower.

It is easy to think of the speed like, high speed should get a more powerful visualization, but I am tempted to think the reverse because the symbol is bounded to a special place on earth and a higher speed means a shorter (in time) representation of the vehicle or whatever it is on that spot. Something passing fast gives a smaller footprint than something passing slow.

So an acceleration would then be:

To me, making the line thicker, feels more like the speed is decreasing, stooping up and time per meter is bigger, longer, fatter.

Another point I think is that a symbol often have to coexist with other symbols. If the symbol is building in thickness or height in third dimension it will have to be the only thing expressed on the map.

You could try using arrow symbols. Length of arrow = speed of the object at that location. You also get direction for free and the whole thing is very intuitive i.e. no need to glance over at the legend to remind yourself of the interpretation.

It's used all the time for wind-speed maps, but there's nothing saying you can't symbolize objects this way too: http://www.cnrfc.noaa.gov/images/storm_summaries/jan1997/misc/300mb_1997.gif

[I know I have seen this done before, but I can't find where.]

How about showing the speed as the 3rd dimension of the plot. Instead of just being a flat line, the "height" of the line could represent the speed. This could also be combined with coloring.

Continuing the size/color theme, how about if using points, larger green circles for fast, smaller red circles for slow, with maybe yellow/orange in between?

I generally agree with all the flow map/change in color strategies listed, but this question is old and I was trying to think of alternative strategies. 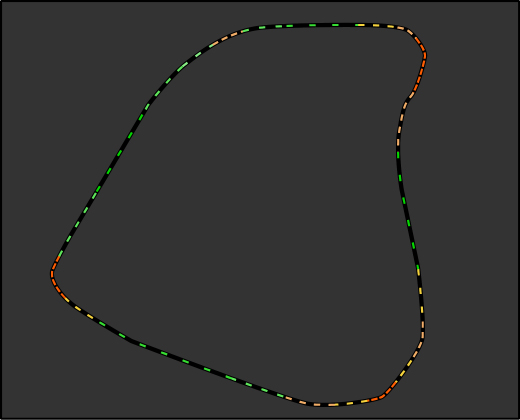 Then I supplement the path with color to reinforce this... The requirement to chart additional paths would just include parallel paths, or separate colors for each path.

Not the answer you're looking for? Browse other questions tagged cartography visualisation spatio-temporal-data or ask your own question.