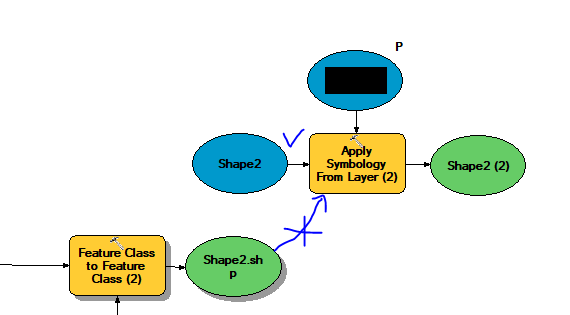 As @BERA suggests in the comments, the input you're passing to Apply Symbology from Layer is incorrect. You can only style a layer. You cannot style a feature class. That is, the tool only works against layers. In your example the output of FC to FC is a feature class, as such this isn't valid input to the Symbology tool. Your working example "works" because you're almost certainly have referenced a layer in your Table of Contents as input, thus a layer.

To make it work, you can use the Make Feature Layer tool after FC to FC and use the output from that tool as input to the Symoblogy tool.

Alternatively, within ModelBuilder you can right click the output of FC to FC and select properties. The 3rd tab: Layer Symbology can be used to reference a .lyr file. Thus, you don't need the Symbology tool.

Not the answer you're looking for? Browse other questions tagged arcgis-desktop modelbuilder arcgis-10.5 or ask your own question.