I have a source raster data set (tif file) and a number of polygon features. For each one of those polygons I need to:

a) 'clip' the raster.
b) change values of those clipped raster cells (with the average value).
c) write new values back to the source raster.

I've managed to do a and b, which means I now have a numpy.ndarray variable where all cells have been populated with the average value. How can I write this back to the source raster?

I believe I'd be able to write a script which could do such a thing. I have arrays dimensions (width and height) and top left cell's position, so I guess it'd just be a matter of operating with these arrays. However, I was wondering whether there's any existing function that does that already.

In the script window_avg is a numpy array containing the new values. How can I write these values back into the source raster?

I would recommend using rioxarray.

I tested it on this input raster: 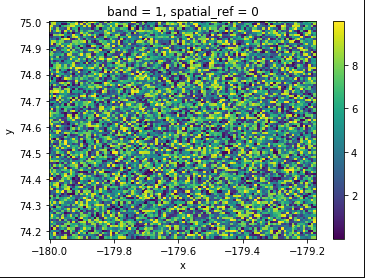 And with four regions to average over, this was the result: 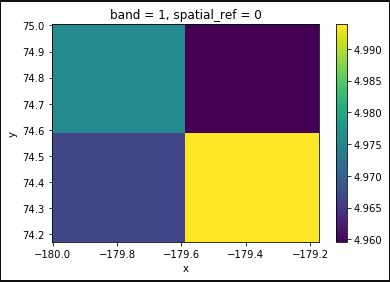 Not the answer you're looking for? Browse other questions tagged python raster gdal rasterio rioxarray or ask your own question.

2
Import raster into PostGIS using Python
3
(How) can I write string data to a raster with Python/GDAL?
5
GDAL (or other open-source) equivalent of Arc's Point To Raster Tool
2
How can I alter the value field in a raster?
3
Buffering pixels in an array- python
2
Clipping raster by mask layer polygon produces Nodata values in QGIS
1
Generating a raster file using 1D numpy arrays
2
What data structure to use for raster data when using rasterio?