Joining lines when direction is not known

I am struggling with this problem. I have a polyline made up of several segments. Each segment is made up of points, each point identified in 3D space by coordinates and elevation. Together, if plotted, the segments make up a more or less continuous line (there could be breaks between segments), but the segments themselves are not consecutive, nor do the points of all segments follow the same direction of travel.
The question is: how can I create, using Python preferably, a single line from these non-consecutive segments so that I can measure the distance between points and the total length of the line.
I don't even know which of the segments is the first one or the last one in the line, but somehow I have to put them in the right sequence and make sure they all point in the same direction so I can measure them.
thank you for any assistance. I'll be happy to supply additional info, data, etc.. I stress I am not asking for the actual python code (not that I would refuse it...), just the strategy. Bob

The segments can be used to form an abstract graph G in which they play the role of nodes. Consider a node that is the segment (arc) from point P to point Q, PQ. Let R be the closest endpoint among all the other segment endpoints to P and let S be the other endpoint of R's segment. G then contains an edge from node PQ to node RS and we will label this edge with the points P and R.

If we are to be successful, then G is either a linear graph or a single cycle. You can detect which is which by storing the degrees of the nodes as you create the edges. (The degree of a node counts the edges emanating from that node.) All nodes, except possibly two of them, must have degree 2. The other two must both have degree 2 (for a cycle) or degree 1: this marks them as the ends of the polyline. In the first case pick any node to start constructing the polyline; in the second case, pick one of those of degree 1. Any other combination of degrees is an error.

The polyline is initialized to the starting node (an arc). Look at one of the edges e incident on this node: its other node tells you which arc to process next and its label tells you which vertices of those arcs to join. (Join the vertices with a new line segment if they do not have identical coordinates.) Update the growing polyline in this fashion and, at the same time, remove edge e from the graph G. Continue until either an error occurs (and report that the edges do not form a non-branching connected polyline) or all edges are removed. If no error is raised, output the polyline you created. 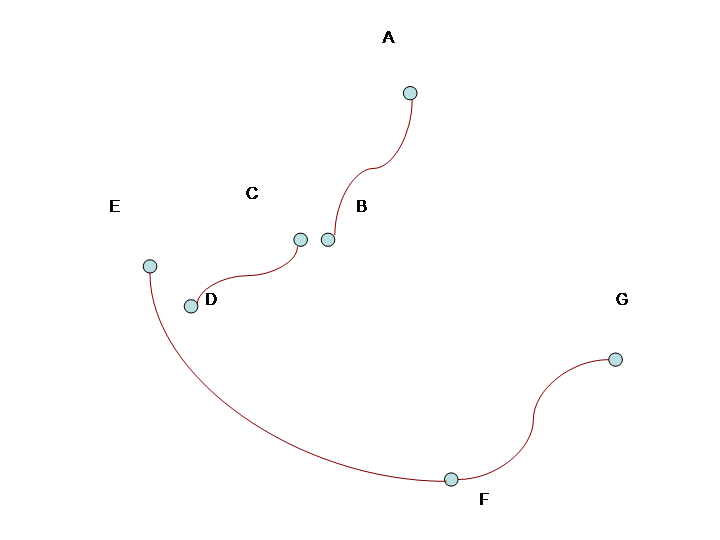 Let us arbitrarily start with FG, one of the degree-one nodes. Because it has degree 1, there is a unique edge EF--FG connected to it, labeled with F. Initialize the polyline with arc G-->F. Because the label designates a common endpoint of GF and EF, we don't have to make a new connection. Remove edge EF--FG from the graph and extend the polyline with EF via G-->F-->E.

This edge removal reduces the degree of EF from 2 to 1, leaving it with a single edge to arc CD labeled with E and D. This tells you to extend the polyline from E to D (with a new line segment there) and thence along arc CD: G-->F-->E-->D-->C. In the same manner, after removing edge ED--CD, you will extend the polyline further to its final form G-->F-->E-->D-->C-->B-->A. You stop because all edges have been removed from the graph: this indicates the procedure was successful.

Following on from whuber's answer, if you are looking to do this in Python then have a look at the NetworkX library that has all sorts of functionality related to graphs, nodes, and edges. I think it is the Traversal functions that implement what whuber is describing. It also includes basic drawing functionality.

Once you have your line orders then you can easily construct geometries in Shapely to do further GIS type analysis, or display in MatPlotLib, export to GeoJSON etc.

You have a lot of segments, no specific order or orientation. You do not know which actually touch or overlap, and which are merely close.

For each segment only the begin and endpoint is important. The goal is to make one big polyline, the orientation of that polyline is not important, i guess.

In that case i would make some kind of set/array of segments, start with the first one, which is entirely random.

Something like that? That is a very high level. You will need to handle boundary cases. I am guessing you know or could the biggest possible gap/distance, because you will need to be able to somehow exclude points being found: if the closest possible point is at the other end of the polyline than it is not an option :) The easiest way to handle that is to define a maximum gap-distance. This will also limit the number of points you will have to look at for eacht segment.

To make it absolutely clear how i would find the closes segment, i will write first a very crude approach:

This is a very crude approach, that will iterate over all segments and check for each endpoint which is the nearest.

Ideally you would have some datastructure where you could ask for all the start- and endpoints that lie within range and only find the closest point among those.

Does that help? I hope it gets you started.

53
How can I switch line direction in QGIS?
3
How to create perpendicular line from point on one line to an intersection with the nearest polygon layer?
7
Draw middle ordinate perpendicular to chord, out to curve, with arcpy
1
ArcGIS 10.2 Extract Polyline from Start/End Coordinates
3
How to turn all lines into one direction?
1
Unsplitting lines with ArcGIS tool 'Unsplit Lines'
2
How to draw two or multiple lines from one location to another without overlapping the lines?
2
Automatically measure polygon length in km