Is there a QGIS bezier curve tool?

I'm a recent convert to QGIS but have been confused about the lack of support for drawing curved shapefiles, especially when Arc has almost too many. A lot of the work that our consultancy do is based around natural features such as lakes/rivers so there aren't many straight lines and being able to accurately represent or work with these features requires smooth curves as opposed to the tools I've been able to find on QGIS so far.

Other threads I've found relating to this have stated that being able to draw curves would require a fundamental redesign of QGIS, how is this though?

Other threads also recommend to use a rough shapefile first then simplify/smooth over to produce your curve but i would be worried about using this simply because you can't see the finished lay of the line when you draw it, which could be frustrating if your boundary moves after smoothing.

As gene mentioned, there is a Spline plugin to digitize curves. Control is limited but it might be a start. Check the plugin settings and adjust the tolerance value to fit your layer CRS and resolution, especially if the CRS is EPSG:4326). 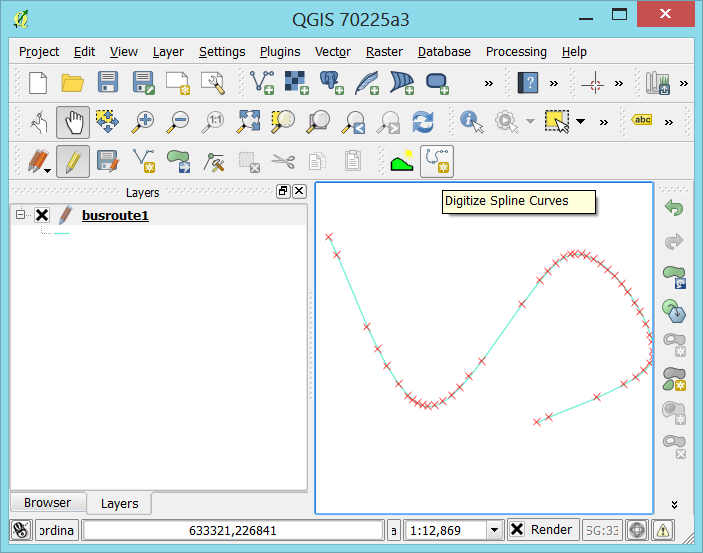 Not the answer you're looking for? Browse other questions tagged qgis shapefile digitizing map-drawing curvature or ask your own question.

5
How to reproduce Smoothing from Generalizer Plugin in v.generalizer in Processing Toolbar using QGIS?
-1
What GIS program should I use to create this map?

33
Is there a way to render lines with a smooth (bezier) curves in QGIS?
3
How to curve lines between points on a map?
12
Is there a Rotate Tool in QGIS?
2
QGIS 2.2 curved labels - 'maximum angle between curved characters' makes label invisible
0
A accurate tool for digitization in qgis
6
Using Advanced Digitizing tool in QGIS?
6
Is there a “Merge Parts” tool in QGIS?
3
Find radius of curve?