I installed the new version of QGIS 3.0 and first of all it worked all fine. After a while I tried to launch QGIS again and now the following problem appears.

After clicking "OK" another window appears: 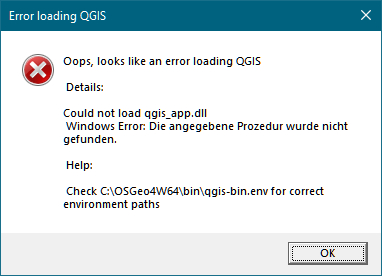 So I opened the .env-file and it says:

What I have done so far:
1. uninstalling the program and reinstalling several times via Standalone-installer aswell as the OSGEO4W-installation - also tried the three different server and with Administrator-rights (as described in Problem starting QGIS 2.14, Prozedureinsprungpunkt is not found)
2. uninstalled and cleaned the registry-data as described in How to completely uninstall and remove QGIS 2.8.1?
3. I searched for a duplicate of the Qt5Sql.dll that appeared another time in my Teamspeak-folder > so I uninstalled Teamspeak
4. Searched for leftovers from old versions and deleted all
5. uninstalled the QGIS-version via the OSGEO4W-installer and deleted the OSGEO4W-folder
6. installed the 3.0 (32-bit version) and later the 2.18.18-LTR version (no problems appeared there)

If anyone has another idea how to solve the problem, I am happy for your help!

14
How to completely uninstall and remove QGIS 2.8.1 on Windows Vista?
1
Problem starting QGIS 2.14, Prozedureinsprungpunkt is not found