Yesterday I was working in a single mxd all day, performing dozens of calculations and other analysis using multiple tools. A lot of it was trial and error, so when I found the correct combination I would label it as such in the Results window before documenting it in OneNote. 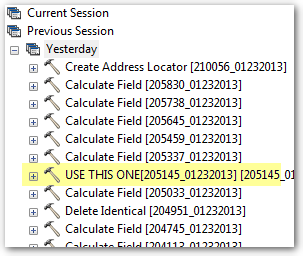 I opened and closed that mxd multiple times, and was able to rerun those tools I had labelled, as expected. When I opened that mxd this morning at work, I found that the tools I had renamed had been reset to their default names - as a result, I've had to trawl through each result until I found the ones I wanted.

What I would like to know is, seeing as the processed tasks persist between sessions as it stored inside the mxd, so even if I open it on a different computer the results are still there, why does it "forget" that I renamed some of them?

This looks like a bug to me because Using the Results window says that Rename on the Result shortcut menu ...

Renames the result. The default name is the tool name followed by the time and date.

I would recommend reporting it but in the meantime I would suggest that Copy As Python Snippet might be an alternative and perhaps better way to record results and re-run them later.

Bug is still present in ArcMap 10.8.1 and listed as "In Product Plan"

BUG-000082214 being in the Product Plan suggests that it has been assigned to a programmer to work on for the next release. If that work is successful and passes Beta testing then I would expect that it will appear in the next release.

I found a workaround for persistent rename:

In the Shared container the process retains the tool name, e.g. "Append", but automatically get's a new parent with the wanted label.

Think ahead because once in Shared it can't be renamed again. 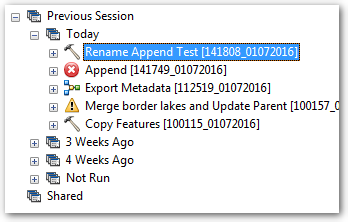 After close and re-open: 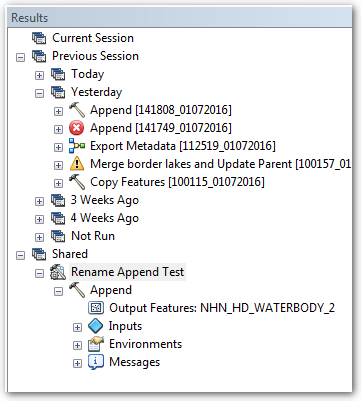 Not the answer you're looking for? Browse other questions tagged arcgis-desktop arcmap results-window or ask your own question.