Is there any option in QGIS to draw parallel lines that snap on the outside part of the line (adjacent lines) that are independent from scale?

I have to draw a map of a public bus transport network and i have a problem in the avenues where a lot of lines passes by. My objective is to make a visual map where the lines in those avenues are parallel one from the other and with no space between them, in order to see all of them at the same time, regardless the scale.

I've tried snapping options, and parallel drawing (CAD tools), but the issue is that when i change the scale, the distance between lines change and they collide or separate one from the other, messing everything.

Note: I don't know if adjacent is used for what I mean, so here I copy an example of what I'm searching for: 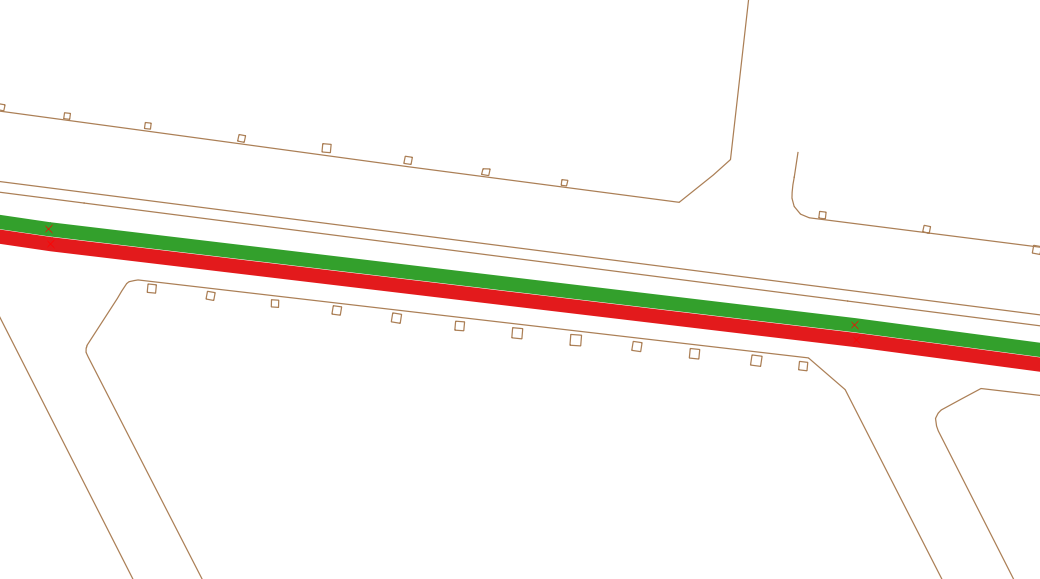 This is what happens when I zoom in:

And when I zoom out: 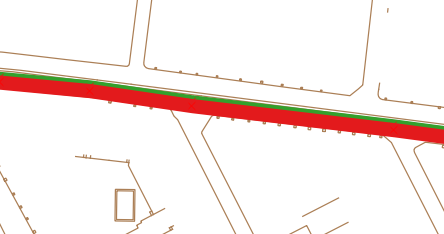 EDIT: Here I share a situation of why the suggested solution wouldn't work for me. Three lines share the same street for a while, but then they separate into three different streets. 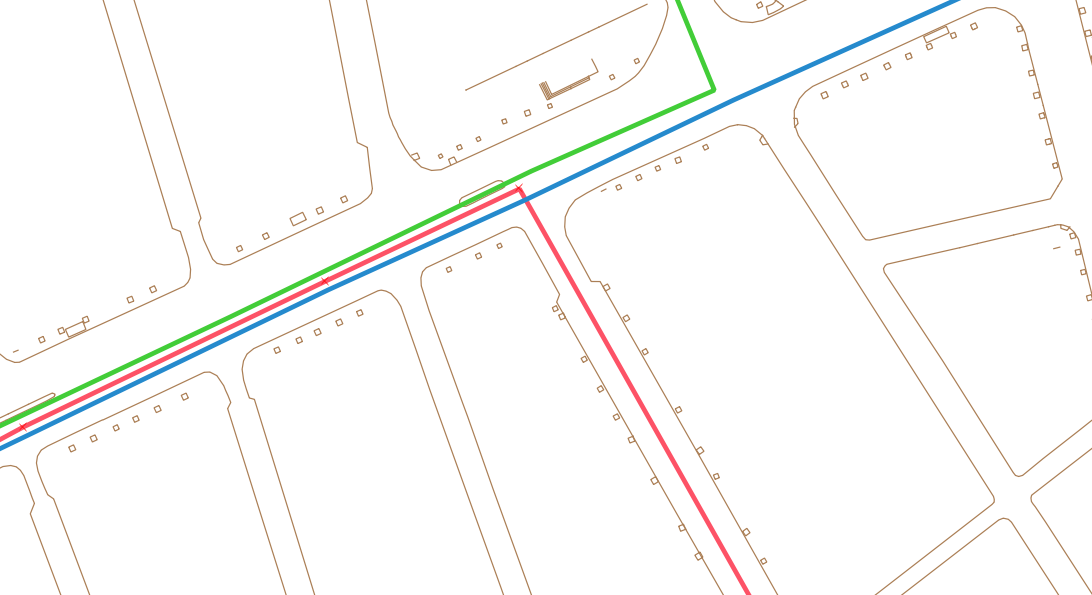 I can't use a single line with several symbolisation because all along the network, the lines split and join again (there are more than 15 bus lines).

The data contained in the attribute data doesn't help me, because it's only a layer full of lines, with no attribute other than some network information (number of buses/hour, passenger/hour, etc.). (QGIS 2.8.6 working on Windows 7)

Not sure this is what you are really after, but you can use a single line with a different symbolisation to create the appearance of two parallel lines.

Starting with a 1.1 km line in CRS 3857 (metric, pseudo-Mercator as per Google and other web services):

In properties, add another symbol layer (so you see two lines). 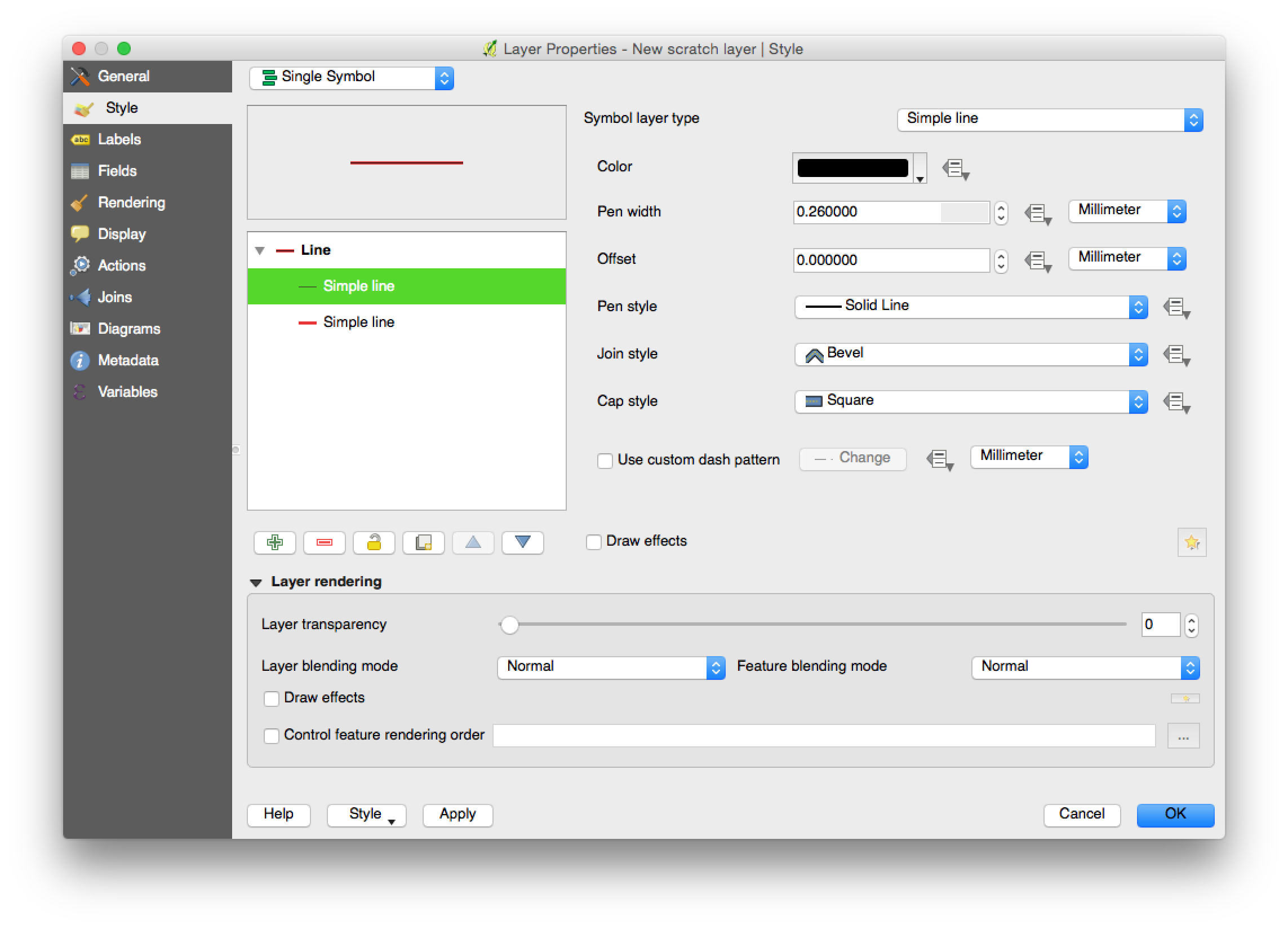 Set the width of each line in map units - in this case, the units are metres and I've selected a width of 50 metres, and set the offset of each line to half their width, with one of them having an equal but negative offset:

This gives the appearance you're after:

... and it persists at different scales:

If by "snapping option" you mean that you cannot change the geometry of the polylines and you can only change their symbology, then what you described is almost impossible.

From your examples, you seem to be looking to render polylines such that the parallel portions touch each other without overlapping, e.g. by having the boundary between the two parallel lines equally divide their separation distance. If we view the polyline representations as their buffers, then you can come up with cases (similar to your Fig. 4), where the same line should have different "buffer" widths at different portions (dictated by the closest neighboring lines). In other words, your buffer width would depend on other polylines and can vary at different segments of the polylines. But typically, symbolization only uses information/attributes of the feature itself.

Of course, you can always use a fixed radius "buffer" around the lines, and manually manipulate the vertices (or edit the buffers) so that the boundaries snap to each other . Then the buffers would remain "snapped" with zoom in/out, although this is a lot of manual labor and adjustment may be required if new lines are added.

Not the answer you're looking for? Browse other questions tagged qgis snapping rendering parallel-lines map-unit or ask your own question.

3
Are there any geocoding plugins for QGIS that interpolate along linear features instead of querying web services?
1
QGIS - WGS84 to BC Albers reprojection no curved lines, any idea why? How to snap a line to a point?
2
Are there any document icons for the qgis mimetype?
2
How to draw a simple bus network that works with pgRouting?
12
Creating parallel lines at particular distance from lines which are part of a shapefile
7
Are there any QGIS tools or plugins that can display photos stored in a database?
4
Different lines that run on top of each other show as different lines
5
Using QGIS to draw a line tangential to an existing circle and parallel to existing lines
1
Making many offset lines that are always a set distance from the previous