I have a shapefile and their X and Y coordinates' values are in Decimal Degrees. I want it to convert it in meters.

I also tried to use Calculate Geometry tool. But as you might see it from below screenshot, I am only getting a single unit, i.e., Decimal Degrees under the 'Units' drop down. 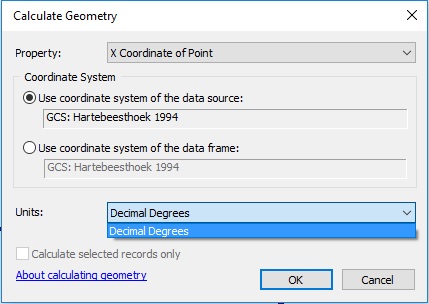 ArcGIS is sensibly not allowing you to do this, because if it did, you would get coordinates that represented the distance in meters from 0° longitude 0° latitude along an angular pathway.

Coordinates represent location with respect to a specific coordinate reference system (CRS). You have coordinates measured in decimal degrees in an angular (geographic) coordinate system, and are asking for a result which only makes sense in a planar (projected) coordinate system. By using the Calculate Geometry tool and looking for the option to output the result in meters, you are asking to have those coordinates converted from decimal degrees to meters without changing the coordinate system. If ArcGIS allowed you to do that and you attempted to use those numbers to calculate distances or areas, the results would be nonsense, or worse than nonsense because they would look like real measurements, but be wrong.

I assume you want your coordinates in meters because you want to display a sensible scale bar or calculate distances or areas in meters. If that is the case, then what you actually want to do is project your coordinates to a suitable planar coordinate system. You can do this using the Project tool in ArcToolbox, or using a variety of standalone tools (such as ogr2ogr) or other GIS software. What constitutes a suitable projection really depends upon your purposes, region of the globe, and extent of coverage.

You will want to use the Project Tool to achieve this. See this question on Converting Decimal Degrees to Meters

Not the answer you're looking for? Browse other questions tagged arcgis-desktop arcmap coordinates xy or ask your own question.

9
Using ArcMap, how may I convert a shapefile to use decimal degrees?
2
Converting shapefile in NAD27 from meters to decimal degrees to match xy data?
3
Euclidean distance tool in ArcGIS refuses to calculate in meters
1
Why are my points offset when using the Go to XY tool?
2
ArcMap Point Distance giving decimal degrees even when in projected coordinate system
2
What is the Python expression for calculating Lat/Long in Decimal Degrees in ArcGIS?
2
Problem with coordinates not being calculated in decimal degrees
2
pyproj EPSG:4326 converts degrees to radians