My intention is to get these files into geoserver and allow the data to be queried and reprojected at will through the WMS. I can get these files into geoserver with the GRIB extension, but I get a null pointer error when I attempt to reproject to mercator. I assume that this error occurs because data lies outside the -180 to +180 longitude bound.

I had attempted to just reproject the GRIB files with gdal_translate, using the PROJ4 +lon_wrap=180option, but that operation takes forever and produces a far larger output file for some reason.

From what I understand, I can fix this situation by creating a custom projection in user_projections/epsg.propertiesthat describes the CRS of these GRIB files. A custom projection for geoserver must be in the WKT format.

Here is the gdalinfo for one of these GRIB files. The file depicts the continental United States: 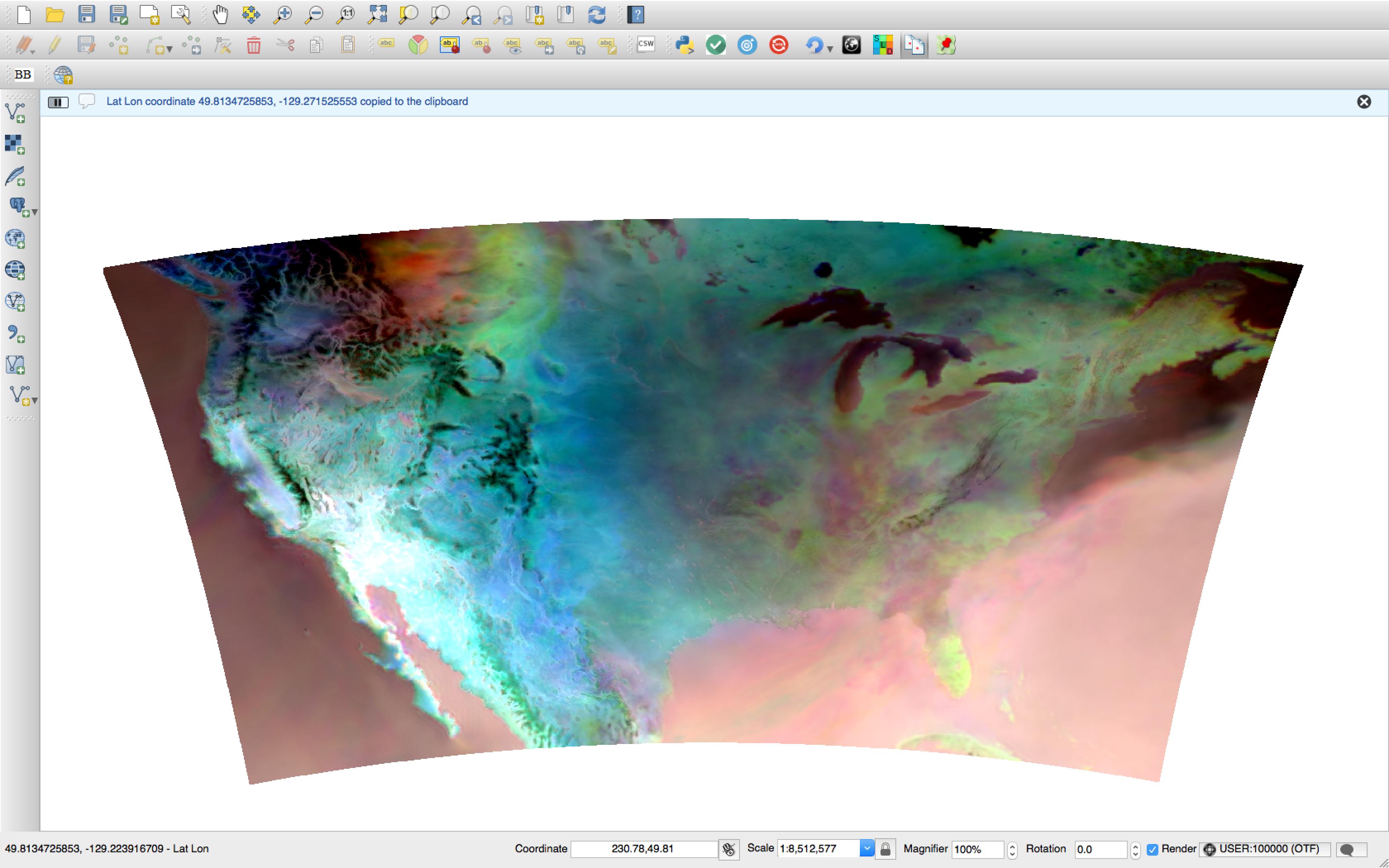 Edit: This is not a duplicate. I have seen the answer from the referenced question, and it is not satisfactory. The operation takes too long to complete and produces a file that is entirely too large.

which is just 47kB large. The extent is calculated by hand. Similar to How to reproject raster from 0 360 to -180 180 with cutting 180 meridian you might as well run

to extract it from the first band. The grib file has 41 bands with a fairly high compression; converting all to tif uses over 1GB and 2 min calculation.

I just ran into this with similar GRIB data... both MRMS radar data and AirNow air quality data are projected in 0-360° longitude, I'm assuming to save space by using unsigned integers.

Using the "+pm" parameter of PROJ fixed this:

For a MapServer layer, this worked out to:

I've not used GeoServer, but this might work for the WKT description:

You might want to give wgrib2 a try. From this file of wgrib2 tips & tricks is the following:

Assuming that you have IPOLATES installed and IPOLATES supports the grid, then you can do:

If you don't want an 1x1 degree grid, you would have to change the grid definition.

+pm=-360 aligned the data for me in mapserver but still wouldn't render properly. I had to replace it with +lon_wrap=180 to get it to work

Although these solutions might have worked for some, in my case, I needed to do rendering transformations of .grib2 rasters on the fly. Geoserver WMS reprojection worked well for the raster itself but the created contours and wind arrows were created only for 0 - 360 longitude and not for -180,0.

Although I wanted to avoid using gdalwarp in my workflow, I had to change my mind and had to warp the grib2 to .tif, which finally works.

Not the answer you're looking for? Browse other questions tagged coordinate-system geoserver proj well-known-text grib or ask your own question.